When analysing the crosscultural mission of the European Churches, one might see different characteristics. We will share a few observations from a Romanian perspective.

1. The need for inclusive language
Defining the concept of “mission” is never an easy task. Nevertheless, the different interpretations of its terminology create gaps in understanding and serving in mission. For Western European churches mission could be translated as: “Let’s go to other countries to serve.” However for most Eastern European countries missiology is merely similar to theology. The result is visible in the latter’s lack of passion and prioritisation of missionary work, and the former’s ignoring the needs of local involvement. Using the same words does not lead to the same meaning for all the European countries. Diminishing the connection with the source of mission, the heart of God manifested in the love for people, decreases the desire and motivation for mission. Integral and holistic mission should be better explained and more promoted among all churches in Europe.

2. Unity in diversity
It is true that churches in Eastern European countries have a small voice in mission and perhaps some think they have nothing to say anyway. But what if their voice is expressed differently that the ones the Western Churches are used to hearing? Would it help to look at their heart and strong desire to serve rather than their publications (or lack of them) and participation in European mission consultations?

Moreover, their official church leaders may not always support mission but regular church members are more committed to sacrifice for it. How can the church members be empowered to serve and how can their leaders be encouraged to be open to invest more in global mission? A key way could be to invite them to come out of their comfort zone through going to them out of the comfort zone of preset mission agenda. Listening to them and valuing their contribution in mission might help them make the necessary steps while enabling the western European missionaries demonstrate unity in diversity.

3. The presence of youth in mission
Eastern European churches still incorporate a large youth presence in comparison to the Western European evangelical churches. These people are eager to be involved in mission. Moreover, all across Western Europe there are many churches made up of people arriving from Eastern European countries. The average age of the membership in these churches is 30. Therefore, these churches need to be encouraged to be involved in mission work and help develop biblical understanding of mission. Generally speaking, they are used to regular prayer and bible reading: values which youth from all over Europe need to learn as the basis for mission. Efforts to pollinate among these youth groups might eventually be worthy for missionary efforts, especially with the arrival of other young people from nonEuropean ethnic groups which need the Church in order to encounter Jesus.

A possible answer could be to organise meetings in the local communities where all these churches are first invited be a community of God and then work together for His glory. Another possible idea could be to open the mission and theological schools to train the Diaspora church members and offer opportunities they never had in their home lands. Partnering and exchanging resources, knowledge and passion might open new opportunities to witness to the new arrivals.

For many years the church in Western Europe was engaged in social action and poverty relief type of mission, presented to the Eastern European countries and its churches. While this is very important, in some cases the message of the Gospel was overshadowed by these activities. Perhaps it is time to put more effort into presenting the message of the good news and be a life model for the churches where, until now, their life saving goods have focused on helping the communities travel through rough times and poverty. The voice of the Shepherd and spiritual care might now be more important than physical food. Signs of love need to surpass the basics of daily survival and thus move to the care of emotional and spiritual life. Too many broken marriages and emotional suffering happens today all across Eastern European countries with not much help from the church. Therefore, there is a great opportunity to assist churches and families in their daily struggles with addictions, burnout or creating a balance of life and family.

Another big challenge is the fear the church displays in mission today. For many years the Western European churches demonstrated a great deal of courage crossing the Iron Curtain and other such obstacles. What can bring back that zeal? Churches in Eastern Europe might fear to lose the resources coming from the Western European churches. Is it possible that the church is becoming timorous? Is this situation increasing as churches across Europe face the reality of encountering believers from other faiths? Partnering together in mission could help both enthuse the zeal and enlarge the potential the churches across Europe have today.

Where are you seeing signs of life and hope?
Even though the church in Western European countries might be view as weakening, she still has the life of Christ and His power. The long legacy and experience of mission work from Europe to other continents of the world constitute an immense privilege and force for the advancement of the Gospel.

Very seldom do churches from the West and the East work together towards such goals. However, they should complement each other, contributing in a partnership that honours the Lord and advances His Kingdom. There is no reason to be shameful or fearful. This Western Church is an example and a model for the Eastern European countries. They have the knowledge (books and research) and the experience so much needed in the mission field. On the other hand, the strong desire to present the gospel around the world with the values and the practices of the churches in Eastern European countries might bring hope to the entire Europe.

Hope comes only if all work together, hand in hand, to overcome obstacle and challenges. There is a lot of progress to be made. The life and hope in mission comes from unity and “bold humility”, as David Bosch put it. Serving together should not be limited to the needs within Europe but continue to intentionally witness and ministry beyond its continent.

God broke the chains communism used to stop Christians spreading the Word in Eastern Europe. Today, we pray that He will break the chains that stop churches becoming missional. 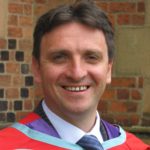 Rev. Alexandru Vlasin, Ph.D., is a lecturer at the University of Bucharest, Baptist Theological Faculty. He has a Ph.D. in Mission Education (Queens University of Belfast) and a Ph.D. in Sociology (University of Bucharest).
Dr. Vlasin organized mission conferences and evangelist events for the Romanian Baptist Churches in Romanian and Western Europe countries. He has also taken numerous short-term trips to over 40 countries. On these trips, he provided training and member care churches and missionaries.