One of the most striking aspects of the socioreligious context of Europe is the high proportion of so-called nominal Christians. These are people who are affiliated to a Church and/or identifying as ‘Christian’ in surveys. They only occasionally, or never, attend a Church service, and many of them do not believe in a personal God, let alone in Jesus Christ as the unique Saviour of mankind.

Despite the declining influence of the Church in society and increasing secularisation, many people across Europe still maintain some sort of link with the Church as an institution, or with the Christian religion. In most countries this is more than fifty percent of the population.

From the point of view of Gospel communication and church development this is an extremely important aspect of the European context. For all the missiological emphasis on reaching out to the completely secularised and creating churches for the unaffiliated or unchurched, we easily overlook the fact that the majority of the European public has not severed all links with the Christian faith.

The idea of nominality
To begin with, the term ‘nominalism’ can be misleading, since it also refers to a philosophical school of thought. With respect to religious identity and practice, it might be better to use the term ‘nominality’ instead.

Alternative terms are ‘cultural’, ‘notional’, ‘de- churched’ and ‘unchurched’ Christians. In Frenchspeaking countries, the standard term is chrétiens sociologiques (sociological Christians) which has the same connotations as ‘cultural Christians’ in English. Similarly, the Spanish speak of cristianismo sociológico or cultural. Germans speak of Namenschristen (‘Christians in name’) or Kirchenferne which could be paraphrased as ‘peripheral’ or marginal Church members’. This is in fact the precise meaning of the Dutch equivalent randkerkelijken.

Whatever the terminology, there is always the idea behind it that something is lacking, that something is not as it should be. This is what we call the idea of nominality. It can be described as the discrepancy between a stated adherence to a faith and a committed application of that faith. This discrepancy can be observed in all religions, but it takes various forms. The’ nominal Christian does not exist. In real life, there are many ways in which people can be at variance with the Christian identity they claim. ‘Nominal’ is a technical term, that is collectively used for a variety of phenomena.

While social scientists try to refrain from giving a value judgment when they analyse forms of nominal Christianity, mission researchers and theologians usually qualify these as deviations from normality, in opposition to another, perhaps truer or more authentic form of Christianity.

How to define nominal?
Where exactly do we draw the line between authentic and ‘in name only’? It is virtually impossible to give one precise definition of ‘a nominal Christian’ that will satisfy everyone who uses this term. It all depends on the criteria that are being used. Social scientists usually look at the frequency of Church attendance, but things become complicated when they take in account other indicators such as beliefs or ‘how much does your religion mean to you’.

In Church and mission circles, ‘nominal’ is often defined by way of negation, of something that is lacking. ‘People who are called Christian, but…’ Of course, everything depends on what comes after ‘but’. Let me mention four negative definitions that are often used:

1 | ‘… not affiliated’
Some statistics use the criterion of church membership. Nominal Christians, then, are those who identify as Christians in surveys or in conversations, without having a link with a Christian community or institution. While this approach makes us attentive to forms of Christian faith outside the institutional Church, it overlooks the possible discrepancies between Christian identity and commitment within the Church.

2 | ‘…not regularly going to Church.’
Socioreligious studies often use this criterion of attending a Church service, to distinguish between nominal and practising Christians. Usually the line between the two categories is drawn at once a month on average. Obviously, this approach is limited because commitment to the Christian
faith implies much more than attending church services.

3 | ‘…not converted (born again).’
In Evangelical circles, this is a classic criterion. Dramatically put, if a person has not entered the fold in the proper way, he really does not belong with the sheep, even though he might go to Church very often and behave very much as a Christian should. This approach leads to a ‘true versus nominal’ discourse that sometimes goes as far as implying that nominal Christians are not really Christians at all. When conversion is defined in an Evangelical way, this discourse creates the impression that ‘true’ equals Evangelical, leaving all the rest of the Christian population as nominals needing to be converted. There is also the risk of an exclusive attitude towards other expressions of Christian faith.

4 | ‘… not committed to discipleship.’
Some Evangelical authors describe nominality in terms of superficiality, of Christian confession and church membership without Christian discipleship. This approach leads to another kind of ‘true versus nominal’ discourse. Contrary to the preceding one, it does not deny that nominals can be real Christians who have obtained salvation. Its emphasis is instead on spiritual growth and a commitment to living out one’s Christian faith on a daily basis.

While it is understandable that church leaders are concerned about the quality of the Christian life among their membership, there is a risk of overemphasising the sanctification aspect of the Christian faith, at the expense of other aspects. Moreover, we do not think it is justified to disqualify everyone who does not meet the standards of discipleship as ‘nominal’, a Christian ‘in name only’.

Parameters of being Christian
All negative definitions are problematic for two reasons: by concentrating on what is lacking they do not say much about the ‘nominals’ themselves. Moreover, they are too general because they focus one criterion, or perhaps two. But being a Christian implies more than going to Church, more than being born again, more than the practice of discipleship. It implies all that plus other aspects as well.

In social science as well as in practical theology, it has become customary to summarize all these aspects in the three Bs of believing – belonging – behaving. But even these are imprecise and insufficient. With respect to believing, we should make a distinction, as theologians have always done, between believing ‘in’ (having faith in God) from believing ‘that’ (having faith convictions). Belonging stands for belonging to a Church, but when it comes to that, we should distinguish affiliation or Church membership from actual participation in the life of a Church. Obviously, the two do not always go together.

Behaving, finally, refers to religious practice. This can mean the spiritual life of a believer (prayer, inner life, spiritual development) as well as a believer’s witness and conduct in the public sphere, in society. Not covered by the three Bs is yet another aspect, namely initiation, the technical term for becoming a Christian. This has to do with Christian education, conversion, baptism and so on.

On the basis of these considerations we would suggest the following seven aspects or parameters of being a Christian:
1) Initiation (how does a person become a Christian)
2) Faith (spiritual experience, meaning, believing in)
3) Beliefs (knowledge, believing that)
4) Church attachment
5) Church participation
6) Spiritual life (practice of piety)
7) Public practice (witness, Christian conduct in daily life in society)

Decisive parameters?
Do all these parameters have the same importance? The answer depends on whether we are talking about becoming or being a Christian. Theologically, in the so-called order of salvation, initiation comes first and the other aspects follow. In real life, we see that some people already participate in Church life, adopt a Christian behaviour, pray, read the Bible, and adhere to Biblical beliefs, before they actually come to the assurance of salvation and ‘take position’ as a Christian.

As for becoming a Christian, this is a deliberate life-orientation, an initial choice in the process of turning to God as he has revealed himself in Jesus Christ. This can be sudden and instantaneous, but it can also be progressive, spread over time; as the fruit of a thoughtful and assumed assimilation of a Christian education. The technical term is conversion, but language in which people express this can vary, as it depends very much on their Church context. It is accompanied by a public confession of faith, often linked with baptism, but not necessarily so.

When it comes to being a Christian, this is an intention, an orientation, a continual choosing with respect to all the aspects of the Christian life. Functioning as a member of a community of believers. Holding to the true doctrine of the faith, practising piety, having a personal relationship with God, the transformation of our life, our daily conduct, our discipleship. Didn’t the apostle James say that faith without works is dead? In the final analysis, all aspects are important and decisive. So, we should consider them as parameters of being Christian, in a comprehensive way.

Ideally, all the aspects go together, but this is often not the case in real life. To be strong in one area of religiosity does not guarantee that a person will be strong in other areas. Inconsistency may be evident in any one of the parameters of being Christian.

Some believe that Jesus died for their sins without belonging to a Church, or without attending Church services. Others in turn are Church members but do not adhere to the major Christian doctrines. Or they will not abide with Biblical norms and values. And then, when it comes to belief, this can mean an affective relationship with God for some, while for others it is more a matter of convictions, or of agreement with the teaching of the church.

Proposed description of ‘nominality’
We would suggest that the qualification nominal, ‘in name only’, is appropriate when the discrepancy amounts to a more or less permanent contradiction with the name one bears. So here is our proposed description of ‘nominality’: Church members and unaffiliated people identifying themselves as ‘Christian’, who are in contradiction with basic principles of being Christian, with respect to becoming a Christian, faith, beliefs, church involvement and daily life.

This description takes up the parameters of being Christian that we have listed above. It can help us to measure nominality in specific areas, and help people move closer to Christ in that area.

A person could be called nominal in the area of becoming a Christian when there is no faith response to God’s offer of salvation through Jesus Christ, no confession of the faith in God and the lordship of Jesus. Someone who holds views that contradict the clear teaching of the Bible, such as a denial of the uniqueness of Jesus Christ, can be called nominal in the area of beliefs.

Are we saying, then, that someone who shows one or more contradictions is not a Christian? No, all we are saying is that such a person is a ‘nominal’ Christian.

Invitation
Definitions and characterisations of the various forms of nominal Christianity are helpful to better understand the people concerned, but we want to move beyond statistics and analyses and connect with them, meet them where they are – outside and inside the church communities – and encourage them to come closer to Christ in areas where they might be ‘far off’. (See above for the parameters of being Christian). A keyword is invitation. God continually invites all people to a deeper faith in Christ and a growing commitment to follow him. 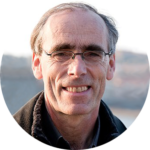 He was involved in developing new churches, and served as a pastor in the Dutch Reformed Church. He published books and articles on a range of subjects, such as the practices of baptism, Christian social action, Evangelicals and the challenge of creation care (already in 1986), Jewish-Christian relations past and present, the Holidays of Israel and the Church.

Evert and his wife Yanna live in Nîmes, in the south of France.