Introduction:
Church planting is a command from the Lord Jesus Christ himself, the Master and founder of the Church who said: “I will build my Church, and the gates of Hades will not overcome it” (Matthew 16:18). It is the best strategy for bringing the gospel closer to the people and fulfilment of the ‘go’ component in the Great Commission (Matthew 28:18).

My testimony and calling to Ministry:
While a student in Romania, I was imprisoned alongside seven other students from South Sudan. That was the turning point in my life and my call to ministry. To make the story short, one day the Sudanese embassy in Bucharest invited all the Sudanese students for “a meeting at the embassy”. Eight of us were Christians from the Southern Sudan that was fighting the Sudanese government to become an independent state. In that meeting the Consul told us that he had decided to send us back to Sudan, a decision we rejected. This led to an argument and a fight between us and the Muslim students. The Embassy then called the police, twisted the story against us, and the eight of us were arrested and put in jail. We stayed in prison for one and a half years.

While we were in Prison, Rev. Chris Newland an Anglican priest, who apart from providing for our physical needs, also got involved in following up our case with the Romanian Government and advocating for our release. Thankfully, as a result, the President of Romania and his government gave us protection and refused to hand us over to the Sudanese authorities. Back home in Sudan, we were sentenced to death in absentia.

It was when I was in the prison that I spent more time reading the Bible and I gave my life to Christ in my prison cell. One night, I heard God’s voice three times saying “you are my servant, I have called you.” I told God “If I am your servant, set us free from this prison and I will serve you. May your will be done in my life.” A short time after that, in 1994, we were released from prison. That moment, I left economics and took up theology.

Confirmation of God’s calling:
Upon our release from the prison, the Romanian government granted us study scholarships and I chose to study theology. In 1995, I joined the Baptist Seminary in Bucharest where I graduated in 1999. My wife and I got married in 2000 and I was then sent to pastor a Church in the city of Medias where we had a fruitful ministry for seventeen months. After that, the Lord told me to return to Bucharest to plant an international and multicultural Church. This was not an easy decision to comprehend, especially for my wife, but through prayer and submission to the Lord we returned to Bucharest in 2001.

Church planting and Pastoral ministry:
Any call to Church planting is initiated and commissioned by the Holy Spirit as exemplified in the call to plant the Church in Antioch by Apostle Paul and Barnabas (Acts 13:1-3). The driving force behind any Church planting is God’s love for the perishing world (John 3:16). When we see the world through God’s eyes and love, we are moved by compassion to go out, plant Churches and minister.

My experience is that Church planting is neither dependent on finances nor on physical infrastructure like Church buildings. No! What we need is faith and trust in God and the faithful Lord will provide for His work. As Hudson Taylor put it, “God’s work done God’s way will never lack God’s resource”. It can start even in a humble home. Our Church is an example. We started a weekly Bible Study in our small apartment which multiplied and grew. In a short time, the space was not able to accommodate us. This was reported to one Pastor through his daughter Fibia who was attending the Bible study, and the pastor and his Church gave us a space in their Church which we freely used before we rented our current facility in the centre of Bucharest.

Another Church planting ministry we had was in a refugee camp, which was accompanied by meeting the physical needs of the refugees. When the Director of the Refugee Camp saw the positive impact, he gave us a Room in the Camp which we used as a Church for the refugees. A Church was planted!

By faith, we started the Church in our apartment and the refugee Camp, and through sister Fibia, God provided the space in the Romanian Church.

In the last years, we have baptized people from many different cultural and religious backgrounds including Romanians who came to the Lord through our ministry (Mark 16:15-16). From the time we started in 2001, over forty (40) different nationalities have passed through our Church. Our Church is like a transit station where people come and go. The good thing is that people hear the Gospel and leave Romania with Jesus.

1. Resistance and threats from people of other religious background:
One time while doing evangelism in refugee camp, a Muslim man threatened to kill me. He told me “if you come here again next week, I will kill you.” I told him ‘you are free to kill me but I will love you to the end and am praying for you because my God is a God of love.’ When we returned to the Camp the following week, the very man who threatened me was the first to welcome us and he attended the Bible sharing.

2. Scrutiny from the security forces:
Romanian security forces were suspicious that I might be involved in illegal activities like document forgery and smuggling people across the border to other countries in Europe as they saw me surrounded by different nationalities. But after a long time of scrutiny, the security chief reached a conclusion that I am a Priest and teaching people to be good people in the society. Since then, the security forces stopped following me.

3. Ordination challenges:
Another challenge we faced was regarding my ordination as a pastor. In 2002, the President of the Baptist Union in Romania denied my ordination to be licenced as a Church Pastor, because I was not Romanian. But God changed their hearts, and I got ordained, and today our Church received the licence to operate. Who can be against us if God if God is for us? (Romans 8:31).

4. Visa challenges:
Before I received Romanian citizenship, I was not able to travel around in Europe due to visa restrictions.

The European Church as a Missionary sending Church:
The early European Church from the time of its establishment was a strong and mission-minded Church that sent missionaries throughout the world in obedience to the Great Commission.We Africans were evangelized by European Missionaries who played a positive role in bringing the Christian faith and education to Africa. I praise God for that!

Complacency:
Complacent life came into the European Church probably after the Industrial Revolution. As life became more and more comfortable the European Church became lukewarm like the Church of the Laodiceans: “I am rich, have become wealthy, and have need of nothing – and do not know that you are wretched, miserable, poor blind, and naked” (Rev. 3:17). The focus of the Church at all times should remain “the Kingdom of God and His righteousness” (Matthew 6:33).

Traditionalism:
When the Church gives importance to tradition more than the living Gospel, it leads to spiritual atrophy, moral decay, and lukewarmness (Rev. 3:16). It is for this reason that reformers like Martin Luther and John Calvin came forward and challenged the traditional Church. Pastors and Bible teachers need to stand for the truth of the word of God “teaching them to obey everything I have commanded you” (Matthew 28:20).

Influences of culture, other religions and paganism:
As an African Missionary in Europe, my observation is that the European Church has been infiltrated and weakened by cultural influences, paganism and other religions. Cultures everywhere influence the Church in many ways including the way people worship. Islam is now strongly encroaching into Europe. Another influence on the Church is the controversial contemporary issues like abortion, same sex marriage, euthanasia etc. The Church seems to be compelled by law to compromise and accept them though not in principle. When the Church becomes complacent and traditional, it becomes vulnerable to all these influences and is no longer the voice of truth. Pastors need to stand firm in teaching the sound doctrine. Jesus Christ might be standing outside, and knocking at the door of many Churches in Europe (Rev.3:20).

What went wrong and what is going on in European Churches today?
We all know what went wrong! It is that people left the Bible and the God of the Bible. My prayer is to see the European Church returning to “The Organic Church” model of Acts 2:42-47 with teaching, fellowship, breaking of bread and prayer in the centre.

The situation of the current European Church
As an African missionary living in Europe, I have witnessed great and positive move in the European Church in the recent years. God is in the move to revive Europe again! Will you not revive us again? (Psalm 85:6).God is working, and there is hope for spiritual revival in Europe again. This is evidenced by emergence of strong evangelical Churches and organizations like the European leadership Forum (ELF). God is also using the diaspora leaders like myself and others in Europe together with the indigenous European Leaders to strengthen the European Church.

Conclusion:
What does the European Church need at this point in time?
What Europe needs at this point in time is what happened in the time of King Jehoshaphat when people with a sound knowledge of the Book of the Law were mobilized and sent to all the cities to teach the Word. That is what I call true revival, a sincere return to the Word of God (2 Chronicles 17:7-9).

The Bible Schools in Europe need to invest in teaching and graduating true men and women of God who will bring revival. Repentance and intercession are needed. Revivals are historically known to follow repentance, sincere seeking of God’s face in prayer, fasting and humbleness before God (2 Chronicles 7:14). The European Church needs to seek God in prayer and stand in the gap (Ezekiel 22:30) and repent on behalf of Europe. God will always honour sincere prayer and repentance of His people and will always visit them. Once this happens, revival will come. 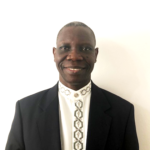 Peter Rong Makur Athorbei is the Pastor of Spiritual Revival Baptist Church in Bucharest, Romania. Originally from South Sudan, Peter came to Romania in 1992 to study economics but God had other ideas. He didn't finish his studies which he went to Romania to do which was related to the persecution and civil war (1983 - 2005) which culminated in the separation of North and South Sudan. In a Romanian prison, he heard God calling him into ministry, and he committed himself to this calling saying ' no' to economic, and ' yes' to theology. In 1995 – 1999, he studied at the Baptist Seminary in Romania. He now lives and serves the Lord in Romania with his family, likes football and reading the Bible.