Was Jesus right about the way to do mission? That’s the question.

Across Europe, across the Western nations, we’ve been looking for ways to reach our nations with the gospel of Jesus. We’ve seen two decades of extraordinary creativity. Our music is more varied, our graphics more compelling, our Bible translations more attuned to the cultures we’re in, and the audiences we’re trying to reach. We’ve experimented with new forms of church – in all kinds of locations, using all kinds of different ways of gathering and ministering. Wonderful. And we’ve seen an extraordinary range of compelling and very effective social action initiatives. Brilliant.

And in almost every European nation, and in mine, we’ve seen two decades of decline. Is there a flaw in our approach?

In 2010, at the third Lausanne Congress for World Evangelisation, I suggested that the overall mission strategy of the evangelical church worldwide was this:

“To recruit the people of God to give up some of their leisure time to support the mission initiatives of church-paid workers.”

Now pretty much everyone in the hall that day agreed that that was the strategy in their country.

The implication of that strategy is that 98% of God’s people, those not in church-paid work, are not being empowered for mission and discipleship in 95% of their waking lives – to minister in the places they usually go among the people they usually meet in their Monday to Saturday lives.

Or to put it another way, overall we seek to make converts, we seek to make church members… but we are not necessarily seeking to make disciples, people equipped to live and share the way of Jesus in their everyday contexts at this time. As Bishop Graham Cray, author of Mission-Shaped Church, one of the UK’s leading missional thinkers put it, “Churches have to realize that the core of their calling is to be disciple-making communities, whatever else they do.” It is not at all clear that disciple-making – in Jesus’ rich, holistic, intentional, relational way – is at the core of very many of our communities. Still, ‘Make disciples’ was not only Jesus’s praxis, it was the mission strategy he gave us. Was he right? And have we been operating as if he was?

There are all kinds of forces that have militated against taking Jesus’ strategy seriously. There’s been the pervasiveness and power of the sacred-secular divide, and there’s the sheer difficulty of changing a church culture that has historically been so focused on the ‘church gathered’ as opposed to the ‘church gathered and scattered’.

But there is a deeper and more alarming reason for the relative dearth in whole-life disciple-making. After all, what we do, reflects what we believe. Our praxis reflects our ethos. The failure to really honour the everyday missional vocation of all believers is a sobering indicator that we have inadvertently been operating with a partial gospel. Is not the whole earth the Lord’s? Did not Jesus come to reconcile all things to himself though his blood shed on the cross? Is there any place where a disciple of Jesus is not his ambassador? Is there any task that cannot be done in his name and for his glory? The good news is not only that we have been saved from our sin, but that we have been saved for a high purpose. Dorothy Sayers, the British writer and apologist, put it powerfully in a famous essay on work:

In nothing has the Church so lost Her hold on reality as Her failure to understand and respect the secular vocation. She has allowed work and religion to become separate departments, and is astonished to find that, as a result, the secular work of the world is turned to purely selfish and destructive ends, and that the greater part of the world’s intelligent workers have become irreligious or at least uninterested in religion…. But is it astonishing? How can anyone remain interested in a religion which seems to have no concern with nine-tenths of his life?

Her point was not just about work. Her point was about the gospel. And it applies today. The overall failure to teach a biblical view of work and to understand work as a context for discipleship and mission is part of a wider failure to offer a whole-life gospel to believers and non-believers. No wonder people are not gripped by the gospel. The gospel we have presented rarely includes any compelling vision for Monday to Sunday life in God’s world, for the adventure of being part of God’s purposes in our ordinary daily lives – wherever we are.

Now, it is precisely such a holistic vision that younger people in particular are yearning for – a way of living that is marked by authenticity, that engages them in a cause bigger than themselves, that seeks justice for all, and health for the planet, and a sense of identity and security that does not depend on their social media status. They don’t want an ‘evenings and Sunday’ gospel, any more than they just want to live for the weekends. Why would they? Yes, Jesus gave his life as a ransom for many, to pay the price for our sin, to make a way to the Father but he also gave his life to have life abundant, and join him in God’s mission – his will be done, as in heaven, so on earth.

Of course, Lausanne’s origins as a movement lie in just such a holistic vision of the implications of the gospel. Our pioneer-thinkers, Samuel Escobar, Rene Padilla, Ron Sider and John Stott raised a banner for ‘integral mission’ but whilst that has led to the transformation of the evangelical church’s engagement with social action on behalf of the poor, we have not yet seen a decisive shift towards the robust discipling of all God’s people for their daily calling in the world. For example, we rightly honour those who help the poor out of poverty, but we are less likely to acknowledge the people who create the jobs, or write the policies, that prevent people becoming poor in the first place. We have a way to go.

And it is that shift we at the London Institute for Contemporary Christianity (LICC) have been working towards for the last twenty years. And we have, in our circles, seen a change. Working with individuals, church leaders, and with denominational leaders, we can now point to churches where people think that everyday ministry is normal, where no one has to tell them to pray for the people they meet in the places they usually go to, where the majority of people would know that what they do in field and factory, office and home can be done for God.

We have learned a great deal and it is now the case, in the UK at least, that whole-discipleship is firmly on the agenda in a wide range of streams – 32 of the 43 dioceses of the Church of England, for example, signed up to be part of Setting God’s People Free, an initiative designed to help churches disciple all God’s people for all of life.

But we are under no illusions. Culture change takes time, not least because the sacred-secular divide has pervaded evangelical culture like pink dye in a white wash, or vinegar in a fruit salad. It affects everything – individuals’ lives, church culture, theological education, what we see in the Bible, who we honour in the church, what we pray for in the world. It affects our small groups, our songs, our Sunday school curriculum, our preaching, our pastoral care. On the other hand, the great commission was not a suggestion, but a command from the King of the Universe. So, how we live that command out, how we help others live it, how we, as a movement, allow that command to pervade our thinking and action in all our specialist areas and in all our different cultures, and how we learn from one another along the way, that’s a conversation we at LICC yearn to be part of. 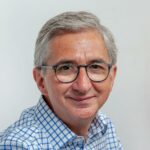 Ex-New York Adman, ex-Vice Principal of the London School of Theology, Mark served as the Executive Director of the London Institute for Contemporary Christianity for 21 years and is now their full-time Mission Champion. A pioneer and champion for workplace ministry and whole-life discipleship, he’s devoted to empowering people to be fruitful for Christ in all of life, empowering church leaders to help them, and helping theological educators train disciple-making church leaders. His books include Thank God it’s Monday, Fruitfulness on the Frontline, The Great Divide, Whole Life Mission for the Whole Church (co-editor), and, most recently, Discipling for Today’s and Tomorrow’s Workplace.

Mark enjoys ﬁlms and ﬁction. He does a passable imitation of Mr Bean and an unrecognisable one of Sean Connery. His wife, Katriina, wishes it were the other way round. His three adult children wish he wouldn’t do either.