Europe’s history is a story of conflict. For centuries, the nations of Europe have fought bloody wars over territory, power and religion. However, since 1945 Europe has experienced an unprecedented period of peace. Of course, that isn’t true everywhere. For those living in Cyprus, the Balkans, and Ukraine, conflict is a recent memory and, in the latter case, an ongoing reality. But most Europeans can’t imagine what it’s like to live in a country at war. And yet, as students of history know, the story of every conflict begins with the events that led up to it.

What signs of tomorrow’s conflicts are there in today’s Europe? What can we learn from previous generations who have shaped peace in our conflicted continent? And how can Christians and churches be “peacemakers” (Matt. 5:9) and “agents of reconciliation” (2 Cor. 5:18) in today’s Europe?

If there is one lesson from Europe’s recent history, it is the danger of nationalism. And when nationalism is fused with populism, the danger is even greater. But before we discuss this further, let’s take a moment to define our terms.

Whilst populist movements can be found across the political spectrum, the fusion of nationalism and populism on the political right has given rise to national populist parties that are now to be found in almost every European country.

National populist leaders draw their power from the “4 D’s”: distrust of their politicians, depravation of people’s economic advantage whether by elites or migrants, destruction of native culture and political de-alignment (Eatwell and Goodwin).

How these dynamics operate can be illustrated by two recent events in European history: Brexit and the Coronavirus outbreak.

The result of the United Kingdom Referendum on EU Membership surprised many, but anyone who travelled beyond London and the South East could hear Eatwell and Goodwin’s 4 ‘D’s in conversation. And the slogan of the Leave campaign, Take Back Control, summed up this frustration perfectly. The argument was clear: Things would be so much better if “we” were in control. So many of our problems are down to “them”. Though notionally targeted at the EU and its bureaucrats, in practice, this anti-European rhetoric made “others” of our brothers from the rest of Europe.

This dynamic of “othering” is also evident in the Covid-19 pandemic. Europeans quickly transitioned from blaming the Chinese to blaming more traditional targets: the Roma, migrants generally and even Evangelicals and Baptists, in the cases of Spain, France and Russia.

Coronavirus has had devastating economic and political consequences, some of which will endure long after the virus has come under control. It was extraordinary to see how quickly the Schengen Area was suspended especially given how essential the value of “free movement” is to the European Union. But more pointedly, the economic impact of Covid-19 brought national interests to the fore as Italy and Spain sought support from the EU for their fragile economies. The resistance of some states within the European Union to the idea of debt mutualisation has a clear message. Despite all the talk of European solidarity, at the end of the day, “you are on your own”. Covid-19 has revealed Europe’s nationalist reflex. Following on from the financial crisis of 2008, the sovereign debt crisis of 2012/13, the migrant crisis of 2015/16 and Brexit, the EU faces a fresh existential crisis which threatens to put nation against nation as the huge economic and political impact of Coronavirus becomes clear in the years ahead.

A Lesson from Recent History

This edition of Vista coincides with two anniversaries. Seventy-five years ago this week, on the 8th May 1945, the forces of Nazi Germany formally surrendered to Allied Forces in what came to be called VE Day, Victory in Europe Day. But the 9th May is also the seventieth anniversary of a three-minute speech by Robert Schuman, the French Foreign Minister, which is celebrated across the EU as Europe Day for it is seen as having a crucial part in establishing peace in Europe..

Whatever our opinion of the European Union, from which the European Coal and Steel Community grew, in our current conflicted state it is good to remember the role that influential Christians like Schuman played in pointing people towards reconciliation and a shared future.

Schuman understood that reconciliation involves the past, present and future. It involves an honest evaluation of the sins of the past: the divisions and inequalities that gave rise to the conflict, and the true nature of the evils committed during WWII. It involves working in the present, in the construction of realities that makes a material difference. And it involves a vision of the future, imagining a future beyond that structure, that would be a blessing beyond itself (note the reference to the “development of the African continent”). Can Christians of today learn from Schuman’s proposal as we seek to be peacemakers today?

It was the French Sociologist Hervieu-Léger who first noted that Europeans suffer a collective amnesia about their Christian heritage. I would add that many European Christians are increasingly amnesiac about the dangers of nationalism. The way that many Christians across Europe are lining up behind national populist politicians simply because they use Christian symbols, or hold traditional positions on certain issues, is very troubling.

The demonisation of the “other”, a defining feature of nationalism, cuts right across the Christian gospel. As the German theologian Jürgen Moltmann reminds us: “The church of Christ is, in its ideal state, on the side of humanity and incompatible with nationalism. When God became human, he became just that, and did not become American or German…every human being, regardless of nationality, is to be respected as an image of God.”

Hospitality to the stranger, to the “other”, is a fundamental biblical value. And for Christian churches, our very constitution in the New Testament will not allow us to build walls of separation, for “there is no Jew nor Greek, slave nor free, male nor female, for we are all one in Christ Jesus” (Galatians 3:28). A church that is not both for us and the other is not a Christian church at all.

So how can we be Peacemakers in today’s Europe? By being like sons and daughters of Issachar who understood the times in which they lived and therefore knew what to do (1 Chron. 12:32). For like Schuman, our task of reconciliation involves both past, present and future. 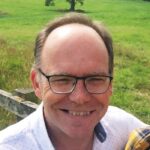 Jim Memory is a member of the International Leadership Team of the European Christian Mission (ECM). He and his wife Christine were church planters in Spain from 1994-2008 before moving into mission leadership.

For the last 10 years, Jim has taught the postgraduate modules on European Mission at Redcliffe College and continues to do this now through All Nations Christian College (UK). He is one of the founding editors of Vista, a research-based journal on crucial issues for mission in Europe, and is the author of Europe 2021, a recent report on the context for mission in Europe today.

Jim and Christine have three adult children and they live between the UK and Spain.