Photo by Hugo Sousa on Unsplash

The nature of society in Europe is changing. My experience is primarily in the UK and even here gone are the days when culture was automatically framed by Judeo-Christian values, and laws passed based on these timeless truths. Since the First World War, and with the fruits of the Enlightenment and Darwin, we have begun to see the retreat of Christians from national life. In the past, the default position was the Christian faith, even if it was not a personal faith as we would understand it. At times of crisis, it was the Church that was turned to. In 2021, no longer is the language of Christian teaching understood or natural. Nowhere is this illiteracy clearer than in the example told me by a senior political commentator who, in discussion with a very senior journalist, mentioned the Book of Romans. The question then came “Who published this book?”

William Nye, a respected former government adviser at the heart of power, wrote about the “secularising spirit” now permeating the machinery of government in the UK and the West. After 20 years of working at the highest level he sees the gradual “squeezing out of Christianity” from national life, despite the public expressions of support from senior Members of Parliament. The effect has been that more and more Christians are afraid to speak out and feel disenfranchised.

What makes this so alarming is that traditionally Christianity has been a very vocal faith. Christians speak the truth because God’s love compels them. Mr Nye’s comments are a reminder that at the very least Christianity is seen as an irrelevance and at worst something which must be rooted out of society in favour of a more progressive understanding of “truth”. Secularism, materialism, and the postmodern mentality has undermined Christian values to the point where Christians themselves feel pressure to stay silent. Liberalism is the new touchstone.

A hierarchy of rights has emerged with the right to be whoever one wants to be sexually, which is nowadays considered to be a more important right than freedom of religion and belief. Debate is being shut down and Hate Crime legislation seeks to criminalise thought and speech in private as well as in public.

Against this background it is easy to be depressed, but God is at work! A strange paradox is evident. On the one hand the UK Government is praising and giving funding to Christian initiatives in communities and recognising the rich contribution the church makes to national life, and on the other it is proposing measures that could privatise Christianity.

At the 2018 National Parliamentary Prayer Breakfast the Prime Minister Theresa May made this comment: “The Christian gospel has transformed the United Kingdom, with its values and teachings helping to shape the laws, customs and society of the country.” While the speaker, Tim Keller, spoke about Jesus’ mandate to be the “salt of the earth”: “Christians should be dispersed in the societies of the world… bringing out the best in that particular culture and preventing its worse tendencies as well. But only if Christians remain ‘salt’, which is different from the rest of the culture.”

So, can Christians still be bold and effect change, and if so how do we do it?

My experience with CARE, a Christian charity which seeks to uphold God’s truth in society, working at the highest levels of Government to propose good laws and mitigate against bad, is that we can and must. In the Creation Mandate in Genesis God calls us to “rule the world with Him and for Him”. He is a God of justice as well as of salvation and we must be a voice for the voiceless. There remain many opportunities to seize. We must while we are still able.

Over the years we in CARE have learned some key lessons about how we act as we uphold truth but with grace.

Firstly we must engage with passion and conviction. Abraham Kuyper, the Dutch theologian and Prime Minister of the Netherlands between 1901 and 1905 wrote, “In the total expanse of human life there is not a single square inch of which Christ, who alone is sovereign, does not declare ‘That is mine!’.” We have a right to “take every thought captive for Christ”.

However, in an increasingly intolerant and spiritually illiterate society we must also do so with wisdom. That means being informed, not making knee jerk reactions to situations, but acting on good research and intelligence. We need to use the right language, meeting people where they are. The Apostle Paul was a master at this. He used the tools and opportunities of his day. He reasoned in the synagogue with the Jews and in the marketplace with God-fearing Greeks. In Athens he disputed with philosophers at the Areopagus and referred to the altar to the unknown God. What is striking here is that he spoke out with courage. Wisdom does not mean keeping quiet when God’s truth needs to be upheld. We must not sleepwalk into the future. The prophets of the Old Testament fearlessly condemned injustice and as the psalmist and Isaiah 58 proclaim, this is true worship.

Of course, it is important to choose the right battles to fight. Politics is often the art of making a choice between relative goods and lesser evils. Sometimes that means that compromises have to be made for a “win” further down the line. The Old Testament prophet Daniel was a wonderful example of this. He immersed himself in understanding an alien culture, but stood firm on the fundamentals of his faith where there was no room for compromise. Often this is a difficult line to maintain. Similarly, the media must be used wisely. This is a whole subject in itself, but a couple of points need stressing. While it is flattering to be invited to contribute, it is essential to be aware of unforeseen hidden traps and to know when not to respond. A plan must be in place in the eventuality of things going wrong.

Above all, as Peter urged us, we must challenge where necessary but always be winsome and respectful (1 Peter 3:15). Relationships are key. The role of leaders in national life is often lonely and places huge pressures on both the politician and his or her family. Indeed, even in the UK in recent years our member of Parliament colleagues tell of horrendous abuse and even death threats. We must take time to get to know our elected representatives and support practically in any way we can. Incidentally, I have rarely known a politician who, when asked if they would value our praying for them, has refused! Commending them for good things they have done to encourage them often means that they will listen when we have to challenge them. In short, we must earn the right to speak and be listened to and build genuine relationships full of grace and truth.

We have to engage prayerfully with integrity and faith, above all recognising that leaders were put there by God ”to do us good” (Romans 13). I find it fascinating that in saying this to the new Christians in Rome, when freedom was under threat, twice Paul stressed this fact. If we do nothing else, we can and must pray for them.

We live in a time when the debate about the role of faith in public life in Europe is becoming even more heated. Indeed, for some it is becoming difficult to navigate. Making sense of what it means to live and act as a Christian in what can be a hostile environment is not always easy, and it becomes even harder the more one gets involved but being salt and light means we must take action.

Returning to Daniel he was able to live out his faith with integrity and, at the same time, find favour in the eyes of pagan kings. He faced tests of faith far beyond those which most of us in the West are called to experience, yet on each occasion found that God honoured his faith, empowered, and protected him.

So, let us “Go into the world uncorrupted, a breath of fresh air in this sinful and polluted society. Provide people with a glimpse of good living and of the living God.“ (Philippians 2:15,The Message) 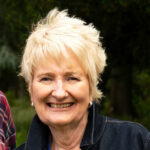 Nola Leach is the CEO of CARE, a Christian charity which seeks to be a voice for truth in the public square, bringing a unique insight to UK policies and law. As Head of Public Affairs and the CARE Leadership Programme, Nola is passionate about equipping the Church to tell a better story for society – one where every life is valued from conception to its natural end. Alongside this, Nola serves many other ministries such as the Christian CEO’s Conference, the European Leadership Forum and the Christian Embassy in London.