Photo by Alexandra Fuller on Unsplash

As Evangelicals who believe in salvation by grace, through faith – a personal and individual decision – our desire is for every human being to live in a context where he or she has the opportunity to freely choose Jesus Christ as Savior. We believe in a God who has given great freedom and responsibility to human beings to choose Him or not, and to assume the consequences of their choices. Freedom of conscience and freedom of religion have, therefore, been values historically cherished by Evangelicals, and rightly so.

In addition to this theological attachment to religious freedom, Evangelicals also face socio-political realities that lead them to emphasize this fundamental right. Globally, the majority of Evangelicals live in countries where their freedom of worship is restricted. In our work representing the World Evangelical Alliance at the UN, I see it every day: when we ask our member alliances what priority issues they would like us to take up with their governments at the UN, religious freedom almost always comes first. The defense of our Christian brothers and sisters whose religious freedom is violated is a cause to which we are called to commit ourselves with strength and courage.

But, and this is nothing new, any good thing and any good cause can also be misused. In recent years, more and more political parties or governments have presented themselves as defenders of the religious freedom of Christians in a way that is in reality instrumentalizing these concepts in the service of a domestic political agenda. Because we are strongly attached to the notion of freedom of religion, Evangelicals are vulnerable to this kind of manipulation. When Christians are associated with such an agenda, it can be an obstacle for non-Christians to adopt the Christian faith. Therefore, this situation compels us to redouble our efforts to consider how we can do the work of advocacy for the freedom of belief that is aligned with the Gospel and that strengthens our Christian witness. Here are some avenues for reflection.

Our commitment to the religious freedom and human rights of people of all faiths is also motivated theologically. We believe that all human beings are created in the image of God and therefore that we form one human family – albeit greatly damaged by the fall. Thus, we should avoid giving the impression that we are only interested in protecting our fellow brothers and sisters in Christ. It is our duty to advocate also for the rights and dignity of our “neighbors” who are our brothers and sisters “in humanity”, including their right to follow what we see as false beliefs. We do this, believing that they will also have to take responsibility for the consequences of their decisions before God. This is a freedom and a responsibility that God himself has granted to humanity. In its 2008 resolution, the World Evangelical Alliance, states the following: “The WEA differentiates between advocating the rights of members of other or no religions and endorsing the truth of their beliefs. Advocating the freedom of others can be done without accepting the truth of what they believe”.

Such a neighbor-centered advocacy goes against the logic of many in the world who advocate only for the interests of their own group and to the detriment of others. Commitment to religious freedom for all is part of this witness of universal love, which is in the image of God and which implies defending the freedom of those who believe differently. It is a prophetic sign and a testimony in favor of the Gospel among the nations. On the contrary, to defend only the freedom of Christians is a counter-witness that is contrary to the biblical teaching that every human being is created in the image of God and endowed with the same immense value.

2) Advocating for all human rights and the rule of law – not just for freedom of religion
Further one cannot choose some human rights and neglect others because all rights are interdependent and interrelated. In other words, we cannot be champions of religious freedom and turn a blind eye to other human rights. If a government does not respect the rule of law, if the judiciary is not independent, if equality among all citizens is not guaranteed, or if freedom of association and expression is violated, there will be no religious freedom either. Religious freedom in the strict sense cannot therefore be our only criterion for judging a human rights policy. If we are truly concerned about the common good of humanity – and we should be – our interest will be for the protection of all human rights.

Second, our advocacy should not confuse what we expect from the State with what we expect from the Church. We expect the State to guarantee a free society where all persons, including Christians, enjoy the same rights and freedoms. We envisage a State that does justice, fights corruption, guarantees freedom even for unpopular minority groups and in which there are no second-class citizens. The role of the Church is to advance the Kingdom of God, to bear witness to His love in action and in truth and to proclaim the Gospel and its values – something in principle it can best do in such a free society. The advancement of the Kingdom of God is not the role of the State. Of course, if the Church, by the grace of God, succeeds in this mission, biblical values will infuse society and possibly influence its laws and the values of the nation and its institutions. Nevertheless, every human society is inevitably made up of a certain religious pluralism and it is our duty as Christians to remain faithful to the defense of these freedoms for all, whether we are in a position of minority or majority.

3) Being prophetic – and avoiding a victim mentality
Several studies show that, numerically, Christians are the most persecuted group in the world, and that unfortunately this trend is growing. This sad reality should challenge and motivate us to pray, to support the persecuted Church and to advocate for the victims and their freedoms. But this situation also carries a risk: that of developing a victim mentality.

A victim mentality is not the model shown to us by the apostles in the New Testament. In the face of persecution, after being beaten with sticks, they even felt joyful that they had been judged worthy to suffer outrages for the name of Jesus (Acts 5:41).

If we analyze the world and its conflicts exclusively from the perspective of the persecution of Christians or the clash between civilizations and religions, then we risk misunderstanding certain more complex realities and our advocacy will not be adequate and wise. For example, if we are too quick to use terminology such as “Christian genocide” in face of conflicts where other dynamics are (also) in play, or where the use of the term “genocide” is an overstatement, even in the case of a tragic reality, the world will not take us seriously. Indeed, such an interpretive lens leads to shortcuts and simplistic understandings, where in fact the root causes are often multiple and complex.

Rather than allowing ourselves to be tempted by a victim mentality or a simplistic assessment of multifaceted dynamics, the way we deal with persecution can be an opportunity to fulfil our prophetic vocation, speaking truth with wisdom. We can seek dialogue with the authorities concerned and invite them, firmly but respectfully, sometimes in public or sometimes in private meetings, to change course and to respect justice and the human rights of the people under their responsibility. It is my hope, that our prophetic advocacy may also be a Christian witness in accordance with the Gospel and God’s love for the whole of His Creation. 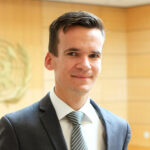 Michael Mutzner is Swiss and French. He has a master degree in international relations. After ten years working as one of the Secretary General of the Swiss Evangelical Alliance, he recently joined a Swiss Christian advocacy agency named "Christian Public Affairs". Since 2012, he also serves as the WEA Permanent Representative to the UN in Geneva.